[kkstarratings]
After nearly a decade, the end of the Game of Thrones TV show is in sight. Fortunately, fans of the series have new things to look forward to, but even for those with faith in George RR Martin, the prospect of a new Song of Ice and Fire novel looks increasingly unlikely. Similarly, what the future holds for video game adaptations of the franchise is unclear. Telltale is all but dead, and for a series that has proven to be such a phenomenal success in other mediums, it’s surprising that there haven’t been more game adaptations. Reigns: Game of Thrones may not be the Elder Scrolls-style RPG you’re hoping for, but it does nonetheless offer a welcome use of the license–even if it does occasionally stumble with repetition.

Reigns: GoT has you take on the role of king or queen of Westeros. You’re faced with a series of situations, and you respond to each card that pops up with a binary choice by swiping left or right. Your decisions impact four different meters you must constantly balance: military, religion, citizens, and money. It sounds simple, but you have to prevent all of these meters not just from emptying, but also from filling all the way up. Becoming overwhelmingly popular with the people sounds great, but it’s a one-way ticket to losing your throne thanks to jealous lords who launch a coup. You’re able to preview the impact of any decision, but you’re only told which meters will be affected and whether it’ll be a minor and major effect, not whether it will increase or decrease.

This results in a certain amount of guesswork when you’re initially presented with any scenario, which can lead to a swift death–I’ve had runs end with my very first swipe. In time you’ll develop an understanding for how to approach situations, and the challenge comes in being prepared for anything. You’re never sure what opportunity or obstacle lies around the next corner, and deftly handling whatever is thrown at you is the key to success.

As is appropriate for Game of Thrones, no character is untouchable, and that’s true for each of the rulers you can play as. Like in the previous Reigns games, your death is the very likely outcome of any run, but it comes in many forms, and discovering them all (whether it’s contracting greyscale, getting lost in the tunnels of the Red Keep, or being burned to death by wildfire) is one of the most entertaining aspects of the game. It’s a rarity that death is a legitimately enjoyable moment in a game, but that’s undoubtedly the case here.

That’s thanks in large part to the excellent writing. Despite each card consisting of a few sentences at most, characters are colorful, distinct, and full of personality. And although the subject matter is often serious, and the world brutal, the game manages to maintain an air of lightheartedness throughout. Some part of that is due to the apparent decision to leave out the sexual assault and rape that is a common element of Martin’s novels and the TV show. The game is better off by not trivializing these things by having you respond to them with a Tinder-style swipe, and their absence makes you feel no less like you’re inhabiting the world of the books and show.

The use of well-established characters is thankfully not heavily reliant on quotes or wink-wink references to the show, like you might expect. While it makes sense that your own ruler’s personality is dictated by your choices, there are the occasional moments where characters feel less like themselves and more like generic individuals who share the name and look of their book/show counterparts, but these instances are few and far between.

Reigns: GoT embraces its non-canonical status, building loosely on the state of the world from Seasons 6 and 7 and allowing it to expand in many different directions. You’re able to make decisions that run contradictory to what we know about these characters; there’s nothing stopping you from making Cersei into a benevolent leader or Jon Snow into a materialistic jerk. You will face resistance where you’d expect; Winterfell is not inclined to take kindly to Cersei’s attempts at diplomacy. This helps to deepen the sense that you are occupying this world, and not one that just happens to have characters whose names you recognize. 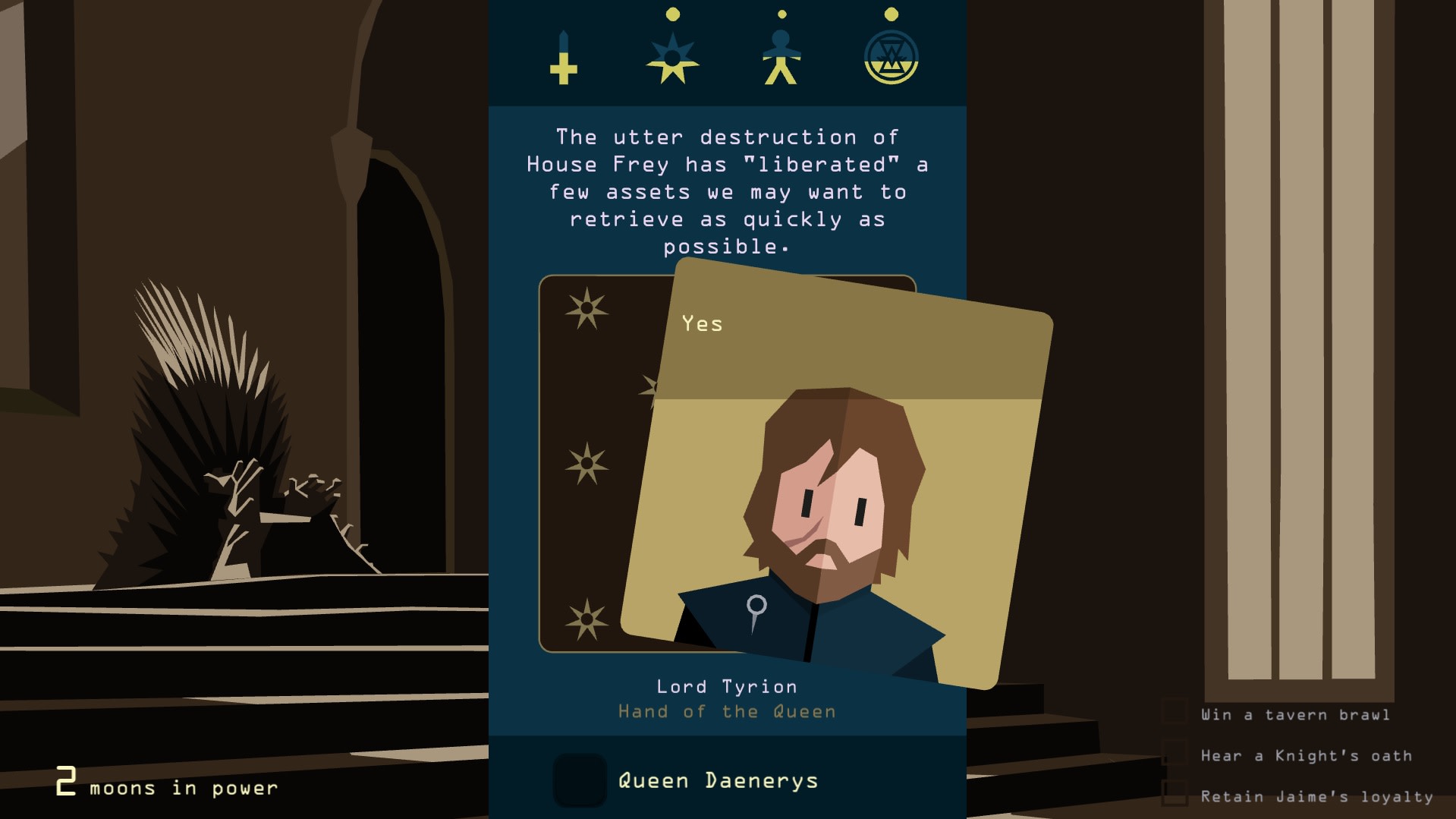 The game is well suited to mobile, where you can quickly knock out a brief run. It’s designed to be replayed over and over as you take different paths and try different rulers and approaches. In time, you recognize patterns and scenarios that emerge repeatedly, and playing begins to feel like exploring an elaborate maze. You can’t save your progress during any run, so you’re unable to do the old choose-your-adventure book trick of peeking ahead to see if you’re making the “wrong” choice. While there were times that I wished I could place a bookmark I could return to in order to see how differently things could have played out, the absence of such a feature provides a weight to each of your decisions. You’ll just have to live (or, well, die) with your decisions, whether or not you like the outcome.

As with discovering the many deaths that await you, much of the fun comes from finding every corner of the maze, rather than successfully navigating your way out of it. The threat of the White Walkers is constantly looming in the background, and some runs do prove to be repetitive and dull, offering nothing new to see or do. But more often, you’ll be faced with some well-written scenario to see through, be it a war with Dorne, the threat of the Greyjoys, or experiments with wildfire. While this could have felt directionless, vaguely described optional objectives–win a tavern brawl, make Dothraki pie, and so on–provide you with a loose path to pursue as you seek to check everything off your list. 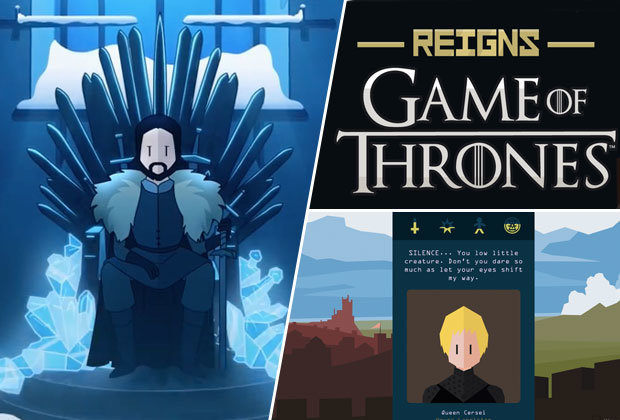 While the Game of Thrones license is the headlining feature, there are some advancements here that provide welcome variety and iterate on the formula established in Reigns and Reigns: Her Majesty. You’ll periodically have the opportunity to pick from a handful of branches of a decision tree (though these still lead to swipe left or right choices). Slightly more elaborate sequences have you making a series of decisions that, rather than directly affect your four reputation meters, determine whether you successfully complete a long trip or win a battle. In the latter case, you’ll have to make tactical decisions about which of your forces to use against specific opponents. StarCraft this is not, but these sequences help to break up the action and make these moments feel like the significant events that they should.

Reigns: GoT is by no means perfect. It doesn’t lend itself to long play sessions thanks to the potential for repetition, which can make the action feel tedious. But that’s ultimately a minor quibble for what’s a genuinely fun experience: a choose-your-own adventure where you’re faced with non-stop decisions and a seemingly endless combination of ways for things to play out.