It’s difficult to talk about Monster Boy and the Cursed Kingdom without discussing Wonder Boy III: The Dragon’s Trap and its 2017 remake, because despite being produced by an entirely different development team, this game is, in fact, an official successor in the Wonder Boy series. But even though its history might be confusing, Monster Boy is a fantastic adventure in its own right, one that distinctly builds upon the best parts of Wonder Boy and adds some welcome modern conveniences for good measure.

You play as Jin, a blue-haired young man who must stop his drunk uncle Nabu from inflicting curses upon the kingdom’s inhabitants and transforming them into animals. Unfortunately, the plot doesn’t really expand beyond that initial premise. With the exception of some moments of levity provided by the cast of interesting supporting characters, the story is uninspired and concludes on a final act that feels shoehorned. But where Monster Boy’s narrative lacks in imagination, it more than makes up for it with its well-honed character transformation mechanic.

Over the course of the game, Jin unlocks an arsenal of equipment and gains five animal transformations–pig, snake, frog, lion, and dragon–each of whom has their own unique abilities. Jin’s human, frog, lion, and dragon forms are also able to equip a variety of weapons, shields, and armor, all of which can be upgraded. Equipping items unlocks new abilities–one type of boots allow you to walk on clouds, while another allows you to double jump, for instance. Quickly swapping between all these different forms to take advantage of their strengths adds a continually enjoyable layer of thought to the platforming experience, and its strengths are regularly showcased by Monster Boy’s excellent puzzle design. 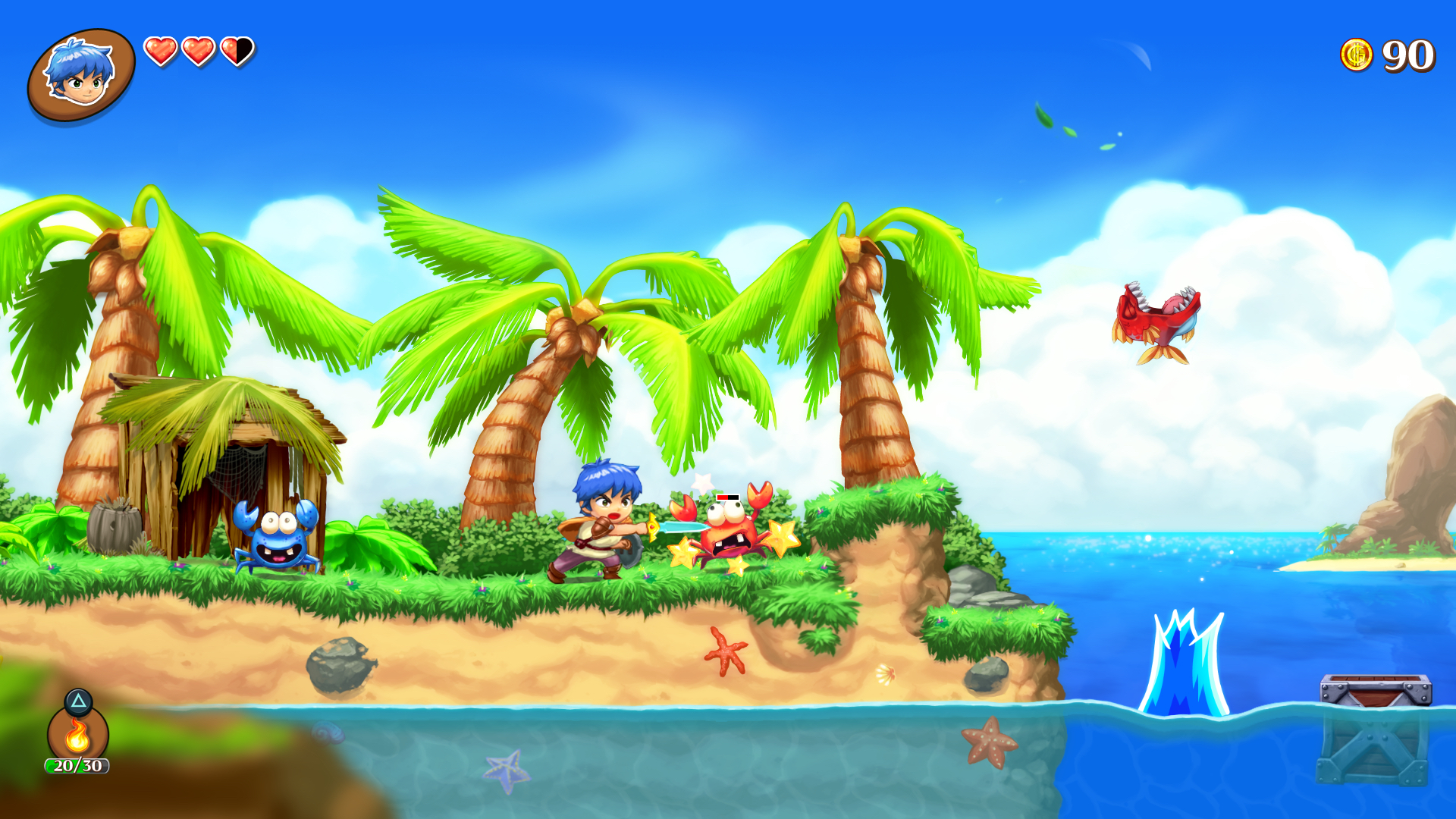 You’re eased into each new animal form and piece of equipment with some basic obstacles and enemies before being set loose to explore the titular Cursed Kingdom. Puzzles scattered throughout require some thought; on several occasions, you’ll be forced to combine the use of several different powers and abilities in creative ways in order to progress forward or reach a treasure. It might be juggling two different animal forms, using particular equipment abilities, or taking advantage of environmental items, and when you eventually figure out how to get there, it always feels rewarding. Puzzles become increasingly complex, the variety of enemies becomes tougher, and the platforming sections feature additional obstacles that require more precise timing as you progress, but the growing challenges are balanced out well by a forgiving number of checkpoints, which help you keep motivated to give things another try.

While the game is primarily linear, the Cursed Kingdom itself is enormous and features several different secret-filled areas (discovering everything will likely blow out your playtime to roughly 15-20 hours), and the variety of puzzles and charming locations that you find in far corners of the world are themselves an attractive incentive to reach. The experience is doubly rewarding when you unearth new paths while revisiting a previously-discovered area armed with a bigger arsenal of animal forms and skills, and Monster Boy even implements a teleportation mechanic to alleviate frustrations of excessive backtracking.

Monster Boy also boasts a brilliant visual and audio presentation that makes the Wonder Boy aesthetic shine, featuring a meticulously detailed hand-drawn art style. Each character is beautifully realized with their own delightful animation–little details, like the pig’s sheepish look as he farts after eating a power-up plant or the frog eyeballing some flies as part of his idle animation, adds volumes to Jin’s characterization and the game’s charm. Every area of the Cursed Kingdom is also visually distinct and beautifully animated, and a couple of superb anime-style sequences that bookend the game help give it a slick, cohesive feel. The game’s strong soundtrack helps round out the package and features both original pieces influenced by Wonder Boy’s soundtrack, combined with new, rock-influenced arrangements of Wonder Boy’s most memorable tunes, making it a great collection of music both new and old.

Monster Boy and the Cursed Kingdom not only pays faithful homage to Wonder Boy, particularly The Dragon’s Trap, but by refining the solid foundations of its spiritual predecessors with modern affordances, it becomes a rich platforming adventure in its own right. With a well-realized world filled to the brim with secrets and excellent platforming mechanics that always keeps things interesting, the Cursed Kingdom is a place you will want to discover every corner of.